49 Days - Why I Stay On Social Media: The Truth, Exposed

Since my days are numbered on this here blog I figured it was time to get down and dirty by getting out the last of the things this forum would allow. Today’s post might leave you feeling like I’m a bitch, or leave you feeling like I’m shallow, or, it might just have you leaving. And honestly, all of that is cool by me, because when the shit hits the fan, what does any of it really matter, right? So with that warning, read on. Or don’t. Or have a muffin. Or sit in traffic. Or breastfeed publicly, like Pink does. Or sign on to some form of social media. It’s all good, either way.

I originally joined Facebook because I was told I had to at my old job, and look what a monster that shit created. Facebook has gotten me into more trouble than most would think it was worth, but not me. I like the trouble. I welcome it. A life without trouble is a boring life, indeed, and not one I would ever want to live. So this is the story, or rather, a list of many little reasons (with anecdotes) of why I stay on Facebook and social media in general…

I moved to Atlanta a decade ago. So weird to say that. This coming May it will be ten years that I have lived in only the second place I’ve ever lived, and when I moved I thought to myself, “How in the fuck am I going to keep in touch with all of these people?” Enter, Facebook. Granted, my best friend isn’t even on Facebook but that doesn’t really matter because I know how to get her if I need her and vice versa (as I just finish up a text to her). But some of my other friends are on Facebook. Folks I had been friends with in the early years like my Donato crew that I spoke of in an earlier post. Shit, Facebook has been our outlet and even a place to share our darkest secrets at times. It has enabled us to not only keep our friendship alive and healthy, but provides us an avenue to plan get-togethers and future events such as dinners and trips. Yeah, Facebook can be a fucking fantasy-filled mess at points, but there are a lot of good people on there that I love and care about, and fuck you if you don’t want to see pictures of their kids, because I do. And fuck you twice if you don’t want to see pictures of mine, because I want to share them, and I do, because I can. I like knowing that they go away on magnificent trips and eat gorgeous food and drink good bottles of wine. I want to know that the people I love are living the good life, and I like being able to share the same things with them and like to think that the people who really love me feel the same. So I will continue to do what I’ve always done by sharing my thoughts and posting links to this blog alongside the pictures of food, wine, and kids. It’s my page; you know how the old saying goes… “If you don’t like it, hide it.”

They’re there. They exist. Let’s not deny it. The “casual acquaintance” whom we accepted a friend request from after meeting them that one time at that one party that you attended with that one guy. Yeah. Them. Or the person you haven’t seen since your eighth grade dance who didn’t speak to you then who why on Earth would they now? Let’s face it, they’re not so bad. Or, they are. But when they are, you hide them for a little while until the time comes for you to do your purge and then you rid yourselves of them altogether. Stop lying to yourself; you know it’s true. And who the fuck are these people, anyway? If they’re professional colleagues shouldn’t they send you a LinkedIn request? Why do they need to know that you posed nude for a photo shoot or drank yourself into oblivion on your third night in Cozumel? Oh, and I especially love it when your husband’s ex sends you a friend request. Yeah. Because I am really DYING to see 30-year old pictures of the two of you making out at the Prom. C*nt. You’re welcome that I used the asterisk. So why do I humor these people, you say? Because it’s what I do. I’ve always been an in-your-face kind of gal and getting on the last nerve of these types of people in particular adds just a little something to my existence. I won’t deny it. You might, but I told you at the beginning, this post is about honesty. I kind of like getting under the skin of these people. Maybe doing so will make them think twice about the next person they send a friend request to whom they don’t know. You. Are. Welcome.

Friends That Once Were.

Remember those girls from the tattoo story? Let me tell you a little ditty about one of them (Are you reading, Nick? This one’s for you.) This is the person who posed as my best friend for years. Sadly and naively, I fell for it. So much so that when I decided that I had outgrown Philadelphia I presented to her a diamond necklace that was made from the diamond stud earrings that my ex-husband had given to me as a wedding gift. What a word “Friendship” is. What a complex idea that someone would be honest with you at all costs, and would allow you to depend on them when you were at your lowest. How fooled I was. This woman – this “c”-word – well, she was no friend. When it came time for me to start a life over, she wasn’t there. I came to find out that she had played my ex-husband and me against one another, and that’s not even the worst part of it. She used to tell people that she couldn’t wait until I got pregnant so that she could see me fat. How about THAT shit? My FRIEND?? Meanwhile, two kids later, I wear the exact same size I did when she and I were friends, and her ass could muffle a three-alarm fire. Oh, and the connection to Facebook? Years after she abandoned our friendship in the lowest form imaginable (so good to know she struggles for *real* friends to this day, which includes someone that she talked so much about behind the poor girl’s back), she sent me a private message letting me know she thinks of me often and hopes I’m well. One of life’s finer moments happened when I deleted that message (after calling my best friend to share this hypocrisy and get a great laugh) and then blocked her nosey ass altogether, because we all know the truth. Was she really trying to say “hi” because she thinks about me?  That’s not the type of person she is. She was checking in to see if I was failing because that would have made her happy, or if I had gained weight because that would have, too. Hope she’s enjoying the divorced life. Oh, yeah, she got a divorce. See, what goes around comes around, Chubby. PEACE OUT.

Exes Who Dumped Me.

I know I shouldn’t get all tingly when I see these guys gloat about their latest flavor-of-the-week only to be dumped on their asses a short time later, but I can’t help it, I do. The reality is that they unfairly treated me pretty badly and so a piece of me feels they deserve it, even if it was twenty years ago. The old “You reap what you sow.” And to the guy who told me I needed to lose a “few pounds” - I was named one of Atlanta’s Fifty Most Beautiful People and you’re almost fifty and working at Lowe’s in the lumber department. I have a gorgeous, successful, understanding, empathetic, tall, beautiful husband (you're welcome, Todd) who is flying me to Germany for my fortieth and your wife is eating Krispy Kremes (plural) in her profile picture. Yeah. I’m all about staying on social media for these train wrecks. Let’s DEFINITELY be Facebook friends. PUH-LEEEEASE.

Out and Out Enemies.

I will accept your friend request just so I can look at your page long enough to thank God just how awesome my life really is. Then, I will say something cruel to you for all of the horrible things you said and/or did to me when I was a pre-teen/teenager/young adult before I permablock you forever, making you wonder why you ever sent me a request in the first place. You’re a douche. You always were a douche. And maybe a bully. Or a bitch. Or a fucking idiot/piece-of-shit. And apparently you still are since you didn’t remember that you bullied me at some point. We’re older now, and you’re still an immature asshole who works at a pizza place and cuts people down, and now, it’s your turn, loser. I am here - I exist – just to ruin your motherfucking day. Oh, wait, that’s right… your life is your own punishment.

And this, my friends (enemies, fake friends, exes and readers)… this is why I love Facebook. It’s the biggest public “fuck you” that exists to all of those who deserve it most. Think I have issues because I get some enjoyment from that? Okay, well, that’s your opinion, so, fuck you if you do. It’s my blog, after all. If you don’t like it… GET OFF IT.

Have a nice day. 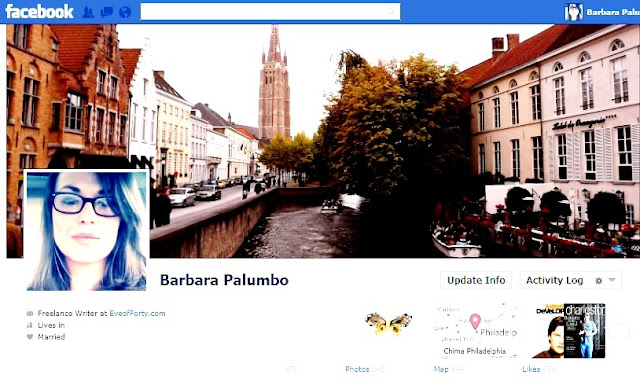