64 Days - What To Do When You're Faced With Fire

There is no greater thing I fear in my life than fire.

By definition, fire is able to cause destruction and despair. It can annihilate, disintegrate, and in certain circumstances, kill. We’ve all seen footage of, or worse, experienced a fire in our lives that had destroyed homes, factories, and acres of forest containing all types of wildlife. But in the metaphorical sense, fire can also represent good. It’s usage in describing a sexual encounter, for example. Or it being the thing that say, gets someone up off the couch, or even better, gets them to update their blog with a fresh post ([clears throat]… err, NOTHING!) and so while fire on the whole leaves me fearful of what I could lose in my life, I would also like to share with you my experiences with the positive side of fire, which I have chosen to do in these few vignettes below.


I stood across the Doylestown-area field watching him through the flickering flames. He was dressed as Braveheart, and I was wearing a maid costume and Magenta-style makeup. The heat from the bonfire was more than my cheaply made polyester costume could handle and so against my will and better judgment I decided to go inside for a drink and a break. 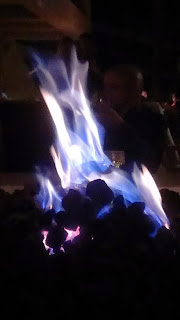 “How do you know Lisa?” he said. Lisa? I didn’t know Lisa. I didn’t even know Tina. But I knew Braveheart, although, not really, but he was invited and so I was invited by proxy, right?


“I don’t,” I said sheepishly, to which this kind soul replied, “Oh, that’s okay. It’s a party, right? Not everybody knows everyone.” “Right. That’s right,” I said as if I were confirming his point that I was somewhat disappointed in myself for not thinking of beforehand. “I’m Barbara,” I said, to which he replied, “Rob.”


The night carried on well into the next day and by the time I found myself alone with Braveheart, his once beautifully painted face was hidden behind runny blue makeup and his once seemingly interested stare was now glazed over from too many servings of alcohol. I watched him earlier in the night through the orangey-red hues with such desire and burning of my own, but now I could no longer watch him as he stumbled through the living room and fumbled with the laces on his calf-high boots.


It wasn’t our time, fire, desire, or not. And as life went on and years had passed I realized it would never be our time.
*****


About two weeks ago my family found themselves twenty minutes away from not having a home to go home to. A small electrical fire started in the crawl space under the house which we luckily smelled and found in time to call the fire department.


My husband, who is my editor on this blog, took it upon himself to write out what he was feeling and sent his writing along to our neighborhood association. I asked him at the time if I could share what he wrote on my blog. He said that for the time being, it was his, and so I didn’t. Today, however, I think he would agree that the experience, which has long passed, belongs to all of us – our entire family – and so today, I share with you what the man I love wrote about the fire that thankfully, barely was.


Yesterday started as most; that is to say, uneventful. Children up and started on their day, time for a shower and to steam a shirt. There’s that meeting you have in the afternoon so you need to look spiffy. And in an instant you forget about all of that. You smell something. And you know it isn’t a good smell. It’s not coffee, biscuits, bacon, or anything else you’d associate with the morning. And it is definitely an unwelcome smell.


After the lightning quick inventory of the most important things in your life (that would be your spouse and kids, in case you paused, wondering) it now becomes a race to find the source of this intruder. Sniff this light fixture; smell that lamp. Did I leave a curling iron on? And, I’m a man, why would I be using a curling iron? You figure out it’s not inside the house and at that point the only place left is underneath it, and so out you go to the crawl space and when you throw open the door that’s when you know you have trouble. That’s when the reality sets in. ‘My house is on fire.’ And that’s when you call 911.


So you get the kids outside in their coats, and you wait for the sirens that you hear every day and completely ignore, unless they are coming up behind you and slowing you down on your way to that meeting you have. ‘Fucking fire trucks. Don’t they know I am in a hurry!?’ But this time they are coming for you, and you don’t care whom they are slowing down on their way to get to you. You just want them here, and now, and so you are laser focused on their arrival. And the sirens get louder and louder, and then the trucks are rumbling down your little street. They seem so big and over-qualified for the job of tackling your tidy 80-year-old wooden structure. And why do we need two? And an EMT? And a COP? And how will my neighbors get to work with the street blocked? And my, this soup’s delicious.


The crawl space is small, and the opening smaller, and every single fireman is bigger than I am, and I am not small. And I wonder how they are going to get inside there to fight the fire, and I can’t help but sense that I see that flash of uncertainty cross their faces as they gauge what they are up against. But they go in, and they find the source. And they put it out. And they exit the crawl space in victory, though oddly you can’t tell that they are at all emotionally upbeat about saving your entire home and history and all the artifacts of your short time on earth. Because to them it’s what they do. And unlike some overpaid running back in the NFL, they don’t spike the ball after they do their job. Because doing your job is supposed to be reward in and of itself. They just wait for the ref to move the chains for the first down and do it all over again. At some other place. Some other home. Maybe, even your home…


I hope, with all sincerity, that it never is your home.


The symbol of the Olympic torch dates back to ancient Greece, where a flame was ignited by the sun and then kept burning until the end of the games. The flame itself represents two things: purity and the endeavor for perfection. It starts at the site of the beginning (Mount Olympus) and is carried and passed from runner to runner in relay form until its final destination is reached – the host city. It is an extraordinary tradition showing strength of will, determination, sacrifice, and fellowship. Not much unlike the torch I passed just yesterday to the next person who will continue a journey that I started.


This blog began over a year ago with the idea that I would document my final year of my thirties through stories about the life experiences that ultimately got me to where I was when I turned thirty-nine. I thought it would be a decent idea to throw in the occasional anecdote about my wrinkles and saggy boobs while also sharing with my audience (all four of you) the positives of aging. No one gave me the idea to start this blog, but once it was started, there were a couple of people who encouraged me to never, ever stop. The man who is now running alongside me on this journey or as I like to call him, my fellow torch bearer, was one of them.


Back in 2008, on the last night of a short trip to Philly to visit my family, I received a private message on my Facebook page that stated simply this:


“Are you the Barbara Palumbo who went to St. Donato’s and moved in the fourth grade?”


There were only a handful of times I remember my heart leaping in my life – I mean really leaping, like, “up through the esophagus and into my throat” shit – and this was one of them. Someone had found me. Someone from the school that I always considered one of the few places I ever felt connected to and comfortable in had found me. And most importantly, it wasn’t just anyone. It was my friend; one of my real childhood friends from the earliest years of my life… Anthony SanFilippo. From that moment on, which was twenty-five years after the last moment ever made with him, it was if the years between had never existed at all.


Anthony is a professional writer. Well, he’s not just a writer; he’s also a bit of a celebrity to anyone who knows anything about the Philadelphia Flyers. He’s a natural, this kid. Born to entertain, and yesterday, as he celebrated the thirty-ninth anniversary of the day of his birth, he suddenly found himself as a runner, too, with the launch of his blog, Adam of Forty, which will (like Eve of Forty)document his final year of life in his thirties. And so the fire that guided my way over the last year will now shine brightly for another year to come, and I have to say, I’m quite proud of what I started. Anthony is the perfect person to care for this fire. He is a father, and so he will nurture it, seeing that it neither gets out of control, nor goes out without ever having a chance to really burn. He is a writer and so he will share his stories with you, the reader, about how the fire nearly singed off his eyebrows or how it cooked him a meal of baby back ribs when he was stranded in the forest after a night of hiking and hunting. But most importantly, he is a friend, and so he will do this fire justice by sharing both the honor and the burden of carrying it with me until that dreaded day in April arrives, which is when he will carry it alone. I urge you to read what Anthony will write. He is talented, and funny, and worth every iota of whatever time you can spare for him, so feel free to put on some nice music, dim the lights, and pull up a comfortable and cozy chair over here, where it’s warm…

By the light of the metaphorical fire.

Posted by EveofForty at Thursday, February 14, 2013