Wednesday, June 6th, 1:07 p.m., Vinings
I’ve got to give it to The Waxer; so far, she’s gentle. Her tiny hands comb the area of dark brown hair above my eyes, then pull at my brow line while she delicately adds the hot wax and OKAY, FUCK THAT! Statement retracted. Statement re-fucking-tracted. That motherfuckin’ HURT. Is this why I pluck? Jesus Christ! Hot wax tearing your hairs from their roots on various body parts in order to look better for a little while. This is what we’ve come to as women? For balls’ sake, are we that desperate for attention from the opposite or our own sex?


Yes. Yes we are. Carry on, little Asian woman. Carry on with your uncomfortably complimentary self. I’m almost forty. I can admit it. Carry on, and on and on again.
The Waxer puts the finishing plucking touches (that was not a typo) on my newly shaped brows and newly reddened-by-fire surrounding skin and hands me a dollar-store-purchased hand mirror so that I may give her my glowing stamp of approval.
“How you lie? Is good, righ? Dey look gooood! Is beautiful. You lie? You wahn burn cream? Cream for burn on your skin, your skin burn?”
“No, I’m good, thanks. Just a little alcohol please so I don’t break out” I replied, and when she reached for the bottle of isopropyl I wondered if an “oh no, not that kind of alcohol” joke would be lost with the language barrier. I quickly convinced myself it would so I decided to just make the joke and laugh at it in my own brain, and let me tell you, it was HILARIOUS, but nevertheless, a mistake as I realized that I had been so distracted by my wit and cleverness that I had let my guard down, and within seconds, tiny Asian hands were now clawing at my panties.


Wednesday, June 6th, 1:14 p.m., Vinings
“Okay you wahn all gone? You wahn all gone, righ?”
“NO! No. No no no. Just… leave some. Like, just here (making rectangular hand gesture in girly-bit area) but take away here (making V-shaped hand gestures in girly-bit area using both hands) and here (more hand gestures toward my pelvic bone line) and you know, maybe, um…”
It was at this exact moment that I felt myself get faint, and it had nothing to do with sniffing acetone. This woman – this Waxer – is now staring directly at the entryway of my “area” and I have neither seen proof of her degree in medicine nor allowed her to take me to dinner and a movie. Oh, who am I kidding… drinks and a kind word usually works. What an awkward thing life can be. What a positively strange moment this is right now to have this tiny Korean woman pulling down my white lace panties while I try to explain in a language not her first from where I would like her to remove my pubic hairs via molten hot wax stuck to fabric bandages in a ripping motion, so that I soon will be able to appear hairless in a bikini at the neighborhood pool that I intend on visiting with my two small redheaded children, my Florida-born Anglo-Saxon husband, and other state of Georgia residents. What a wild, wild ride this thing called life is. And what a cruel, cruel joke at times, too. 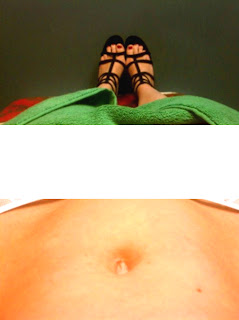 I will spare you the details of the last part of the description I gave The Waxer as to how I would like my bikini line to look, except for this one: there really is no way to explain the term “landing strip” to someone whose English is about as good as my Swahili. I was done. The clothes were off. The shoes, still on. And it was time.


Wednesday, June 6th, 1:20 p.m., Vinings
Women often overuse their experience in childbirth when describing a pain like no other that exists in the world. I am not one of those women. For me, while painful, I found childbirth to be bearable. Granted, I was the coward who opted for the epidural, but while I still felt a tremendous amount of pain during labor, I will still stand by my just-typed statement: bearable. This, however—this whole waxing experience—not so bearable, for a plethora of reasons. My toes and feet were pointing towards different corners of the room. The Waxer was going off about how she couldn’t believe that my body looked the way it did after two kids. The fake, plastic flower vine draped over the fake, plastic framed wall mirror. The dismal yet still overly bright fluorescent lights staring down at me from in between the stained drop ceiling tiles that accompanied them; laughing at me in buzzing-like fashion. The uncomfortable “bed” against my back. The cheap velvet pillow under my head. The sound of the ripping tape.  The smell of burning wax. The sudden breaths taken from me, never to be given back. The water that fell from my eyes with each strand that was removed. The pain that I felt both physically and emotionally as I lay there wondering, “Is it all worth it?”
When it was over, I wiped the tears from my cheeks and uncomfortably dressed into my work clothes while The Waxer stood by the door in a John-like stance waiting to see if there was anything else she could “do for me.”
“Okay. Well, thanks. I’m going to dress now, and I’ll be out to settle up, okay?” I expressed without so much as looking at her so that hopefully the language barrier had been broken down enough for her to take the fucking hint. I wanted to be alone. I wanted to be alone with my now mostly bald hoo-haa. We needed to get acquainted with one another as well as with our two new friends – hairless ass cheeks. The four of us just went through something fairly traumatic together… like we were the only post office patrons to survive when the shooting occurred earlier that day. We didn’t really know each other until then, but that horrible event now bound us together for life. I dressed and looked at myself in the mirror, disappointed by so many things that I saw, and yet, liberated just a little. I did it. For whatever my reasons, I did it. And I made it out alive. All four of us did. And now it was time to walk out into the bright sunlight with our heads, cheeks and lips held high.


Wednesday, June 6th, 1:38 p.m., Vinings
“Tank you foh you see me. I see you tomorrow? You wahn pedicure you say, righ? Wha time is good foh you?”
“Oh, totally. Uh, put me down for 1:30, will that work?”
“Yes. Yes. ONE THIRTY dat work, okay? Sooo beautiful, I see you. I see you beautiful. Bye-bye see you tomorrow!”
And off I went with more than my pubes removed, and with a wave of my hand to The Waxer, I vowed never again to return to the sounds of time being yelled in a Korean accent.