Last night, women like me lost a heroine to leukemia. Women who are just a little different, just a little sassy, just a little cocky and a just a whole lot funny. Women who like to read, love to write, and feel natural telling a joke. Women who are watching their years pass them by and wishing they had spent more time in a bikini; who had married the wrong man first and been given a second chance at making things right, for themselves. Last night, the world – my world – was neglected of any more essays/short stories/novels or screenplays by the superbly talented and naturally gorgeous Nora Ephron. Since Nora was an atheist, I won’t make any God or heaven reference. I’ll simply say that the soil that her body will lay beneath will be the deepest, richest and purest soil in all of the earth and that I, personally, am jealous of the ground that will get to hold her near and dear to it.


“You’re funny for a girl…”
I can’t tell you how many times in my life my ears have been blessed punished with that line. I’m funny… for a girl. Fuck you. I’m funny for a human. I’m funny for a mammal. I am. C’mon, name one humpback whale funnier than I am. Didn’t think so. Women everywhere – from Poughkeepsie to Pokalev – are goddamned fucking funny, we just don’t want everyone to know about it, because frankly, when it comes to getting men, it’s the ace up our sleeve.
Back in late March my husband, a non-Facebooker, asked our dear friend to post an open love letter to my Facebook wall so that I could read it and take the knowledge with me on my two-day trip to New York without him. He said he did it to remind me of all of the reasons why he fell in love, and continued to be in love with me. It was genuine and honest and even painful at times to read, because I knew the type of guy he was and how hard it must have been for him to be so open, so publicly. The following excerpt is from said letter, and I think this piece says “you’re funny for a girl” the way it could be said to make it less offensive for the listener… “You’re funny. A lot of women aren’t.” 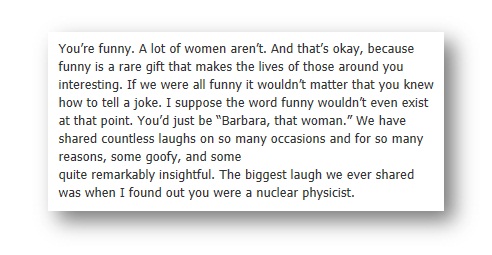 I am not a nuclear physicist. Who here is stunned? What he’s referencing is the time I forced him to watch the VHS video from my high school graduation. The poor guy got through about eighty minutes of cringe-worthy dullness when finally, during the awards ceremony for the highest average in each class, my named was called. “Barbara Palumbo, please come to the podium to accept your award of excellence in Phys….” and the tape stopped.

I never saw my husband laugh with more intensity. Ever. Even since, and he laughs a lot. We’ve seen Eddie Izzard in stand-up. He’s one laugh-inducing mother-fucker. And still, I never witnessed again what I was witnessing at that moment. I’m not kidding when I say I thought he was going to have a heart attack, either. No hyperbole. The man had lost it, and it was nice to know that upon reflecting about our life together, he chose that memory as his opinion of the funniest.
The reality is there are as many funny women as funny men in the world, and as many unfunny of each, as well. I dated one-too-many unfunny men in my life with those dates usually ending up being one-time events. If you can’t make me laugh, then chances are you’ll never make me scream. My world is too fucked up and I’m too German to be reminded of how serious I could be. Laughter and being the cause of laughter in others gives me as much pleasure as, well, nothing, I guess, because nothing gives me greater joy, and nothing is a greater compliment than knowing that above all else, I’m funny, for a person. 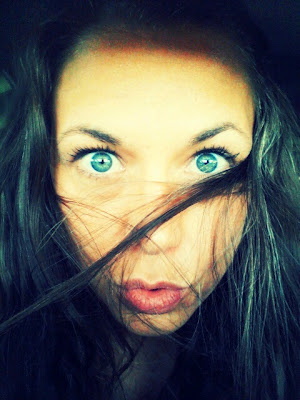 I’d like to end this blog with some of my favorite quotes from Nora Ephron and to promise her memory that I will continue to write, and live, and make mistakes, and be myself so that I may hopefully, one day, be written about by a funny woman, thirty years my junior, and remembered as someone special in her mind.

“Oh, how I regret not having worn a bikini for the entire year I was twenty-six. If anyone young is reading this, go, right this minute, put on a bikini, and don't take it off until you're thirty-four.”
― Nora Ephron, I Feel Bad About My Neck: And Other Thoughts on Being a Woman
“Every so often I would look at my women friends who were happily married and didn't cook, and I would always find myself wondering how they did it. Would anyone love me if I couldn't cook? I always thought cooking was part of the package: Step right up, it's Rachel Samstat, she's bright, she's funny and she can cook!”
― Nora Ephron, Heartburn
“The desire to get married is a basic and primal instinct in women. It's followed by another basic and primal instinct: the desire to be single again.”
― Nora Ephron
“I look as young as a person can look given how old I am.”
― Nora Ephron, I Remember Nothing: and Other Reflections
and most importantly...
“Above all, be the heroine of your life, not the victim.”
― Nora Ephron