This is not my mother’s forty.


According to Wiki: Middle-age is the period of age beyond young adulthood but before the onset of old age. Various attempts have been made to define this age, which is around the third quarter of the average life span of human beings.
I shall repeat… “The third quarter of the average life span of human beings”
Wait, what??? Half-time is over???? Where the fuck was I? Who the hell performed? J-Lo? Janet?? Oh, don’t even tell me I missed The Rolling Stones. Jesus Christ, if there’s a poster band for getting laid at “old age” it’s the goddamned Stones. Mick Jagger and my mother were born the same year, you know… which means that man will be SEVENTY next year. Seventy. And so will my momma. Which also means that I will be forty…  hence, why you’re reading what you’re reading right now…  eh, harumph. Harumph, I say. But like I said, this is not my mother’s forty.
June Delores Hoke was born on January 17th, 1943 to Harold Hoke and Beatrice Leonard. She was the first daughter and fourth child of Harold’s to survive childbirth (third child of Beatrice) and is now the oldest surviving family member of the Hoke siblings, sadly. June, or “Junie” as my dear Uncle Jay calls her, is a kind woman without an evil bone in her body. She’s sweet, but tough, a bit naïve, and overall a really good sport. She’s the hardest working woman I’ve ever known and has instilled that in me, her only daughter, from day one. She’s not particularly “girlie,” which I’m fine with, and her taste in clothing peaks at her teddy-bear Christmas sweaters, but honestly, I’m fine with that, too, because that makes June who she is, and I wouldn’t have her any other way. 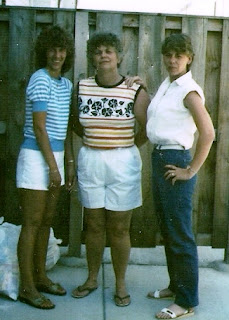 Just days before my tenth birthday my folks moved our family from the apartment we lived in, in West Philly, to a house in the projects of South Philly. They thought this would be a good idea because while the projects are just that, it did allow for me to finally have a bedroom of my own and no longer have to sleep with my mother, so, I didn’t disapprove overall. My mother had celebrated her fortieth birthday just months before (that’s her in the middle with her two younger sisters on either side) and at the time, I didn’t think that forty should look any different. Why would I? She had three kids, lost both parents at a fairly young age, worked her entire life, survived two marriages (one that she was still in that was abusive,) and hell, she had me as a kid, which would be enough to make anyone go batshit crazy and prematurely gray. That is, of course, until I realized that I was forty, or just about, and that I had experienced similar circumstances to what she had growing up. And now, my opinion of forty and of what it should look like has changed quite drastically. Sorry, Ma. To quote a cliché I’ve heard you use hundreds of times in my life… “It is what it is.” 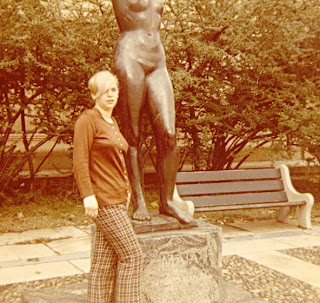 Mother June was, at one time (at least in my mind) fairly fancy. Check out this photo of when she and my father just started dating. She’s got the cool Courtney Love hair going on with some dapper hipster plaid pants and a stance that would make any London-born-wanna-be-rock-chick proud. She looked rad… “edgy” even. And she’s hanging out at the Philadelphia Museum of Art which makes this picture even cooler. I’m sure they didn’t pay admission to go in, mind you. My dad is pretty cheap, after all, so they likely just hung out at the statues around the outside, but still, I’ll give them cred for the thought. The point is that June, at the ripe age of 27 and having already had two kids at that point, was a serious contender for hottie-dom. So why in the hell did she go from frisky to frau in a matter of thirteen years? Thirteen years is nothing, unless you’re five and starting kindergarten, then of course it’s EVERYTHING. But as an adult, thirteen years flies by in a heartbeat. Hell, I got married thirteen years ago… to my first husband. It seems like yesterday, and in reality, I am probably in better shape and look better today than I did back then. So what makes a momma give up on being hot? What made my momma do it? Had she caught the man of her dreams (insert roaring laughter here as I think of my selfish, deadbeat father as the man of anyone’s dreams)? Did she say “hell, I’ve had three kids at this point… screw it!"? Or was she simply just not as vain as I am? Or, even vain at all? And why am I so vain? And where did this biscuit come from? And my, this soup’s delicious! (“Clue” reference for the Eileen Brennan fans in the room.)
I see it this way, kids: Being “older” is not the end of being beautiful. Yeah, yeah, yeah…  I know all about the whole “beautiful on the inside thing” but let’s cut the crap, shall we? Beautiful on the inside is nice, and it gets you things like Ms. Congeniality titles and Nobel prizes, but who the hell wants those anyway, am I right? Does it get you ahead of the line at the club? No. What about free drinks? Nada. Apps at your favorite eatery in Midtown? Shit, no! Oh, I know this all sounds shallow and I’m sure I’ll catch some slack from it, but what I mean to say is that unlike my momma, and I love her dearly, I’m not giving up so fast, so soon. I’ve got years left... YEARS, I SAY! And I give everyone I know permission to poison my scotch if you catch me walking around with a salt-n-pepper Jheri curl and “mom jeans” before the age of seventy. No, you know what… screw it… before the age of eighty. After all, Mick Jagger is seventy and is still totally fuckable.
Posted by EveofForty at Saturday, May 05, 2012