93 Days – Tales From the Sinkhole, Part 1: How Do You Barter in Marriage?


Let’s face it, there is a complexity in marriage unlike any other we have known in life. It has been written about in everything from nineteenth-century poetry to twenty-first century trash novels. It’s been laughed about on stages across the world, sung about in dive bars and mega-venues, and cried about by grown men, bitter women, and children of the divorced aforementioned. Marriage is the eighth chapter in a well-written novel of your life; your character has been established but needs the next eleven chapters to define itself, though never fully, until either death or separation gives the reader the climax it knew would either ultimately happen or never saw coming, no matter how many bloody battles they had read about. Marriage, for me, has been as edifying as it has been laborious, but it is the path I have chosen to take as a person whose nature is to want to explore. And so there are days when the road is wide and free of litter, and days when I catch a glimpse of a beautiful hawk, circling alone above a field not very far off. There are days when even the lushest tree can’t shield me from the rain that is torturously beating down on my skin, and days when I legitimately know which way I am headed, to even my own surprise. As cliché as it is –and it is, without a doubt—marriage is a path, or rather a section of a path, in a little flattened town somewhere south of the Canadian border known as Lifeville. But unlike songs you’ve heard on the Gospel or Soft Rock stations on your car radio or in your salon of choice, it is not a path you walk with someone else. It’s not. I’m sorry to burst your bubble, but you walk this section alone, amigo. Fully and completely solo, so before you walk it, you might want to take some time and research walking shoes. Consumer Reports is a good place to start from what I hear.


On the sixteenth of every month since May 16th, 2004, I have been wished a happy monthly anniversary by the man I married, or rather, the man who married me. For a while it was a competition—as most things are in our marriage—to see who would remember first, but in the last one hundred and four months since that beautiful spring day in Asheville, North Carolina, I’d say I’ve won that game about three times. Maybe twice if I’m being honest with myself. And every month it surprises me that he still keeps the tradition going, in the same way that it baffles me that he remembers to place my reflux medication on the breakfast bar next to a rocks glass of tepid water every morning for me to take, because he knows how terrible I am at remembering to take care of myself. He knows when the oil in my car needs changing. He knows when I’m due for my teeth cleanings. He changes the blown out light bulbs without ever being asked. He schedules the kids’ pediatrician appointments.  He even edits, successfully, anything that I write for publication and will edit this very post likely on this very day. He is by all accounts, “The Fixer” for a woman who has always considered herself “A Fixer” and yet I would trade all of it in a heartbeat for the things I categorically need from him. He’s a thinker—thoughtful at times and overthinking at others—but how do you tell a thinker that you just want them to stop thinking? That you would trade every pill and greeting and light bulb for a chance at a particular happiness that has long been deprived of you? How do you barter in marriage? 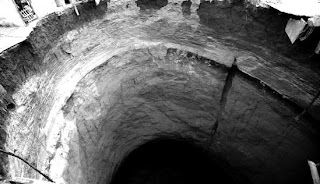 “Easier said than done” is as overused as “if it’s meant to be, it’s meant to be,” and yet I can think of no more fitting adage to sum up the sinkhole I have found in my path that is keeping me from taking another step forward. What do I do? Do I turn around and go back? The frigging thing is HUGE. There’s no way I can jump it alone; that’s not even an option. Do I turn and walk through the needle-thick forest risking cuts and scars so that I can simply find a second path that will take me into an even more unknown unknown? Do I stand here and wait, hoping that the hole will just fill itself up on its own? Or do I fill it? Do I spend the time—years even—building it back up using dirt and branches and litter and sticks until it’s at least high enough for me to jump down into, stumble across, and hopefully climb back out of?


Every month except two for the last one hundred and four months I have been wished a happy monthly anniversary by that man who married me. Why have I only done it two times? Because I didn’t think about it, that’s why. It doesn’t mean it wasn’t important, but what it does mean is that I was in my marriage… being married… living my marriage, and there is a distinct difference between being in something; the feel and taste and smell of it (think, three dimensional), and thinking about something which involves thought alone (two-dimensional). One isn’t better than the other, but there are times and places for both and even situations where neither is needed. Thinking. Being. Thinking. Being. Thought. Action. Thought. Action.


I am theoretically sitting down on a patch of dirt in front of this massive sink hole, waiting, I guess, for February 16th to arrive, but for some reason, it looks like someone left this pair of cool 3D glasses on the side of the road. I’m going to keep them, just in case.
Posted by EveofForty at Wednesday, January 16, 2013